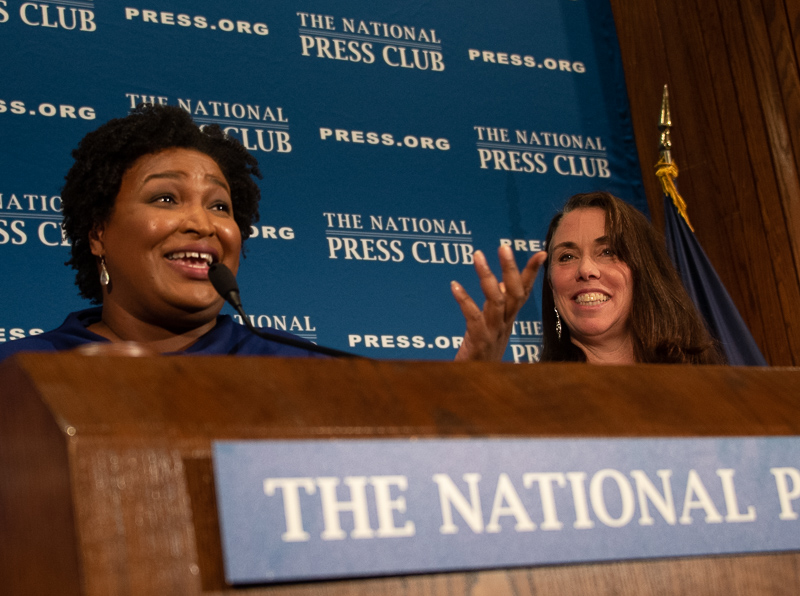 An organization created by former Georgia House Democratic Leader Stacey Abrams after she narrowly lost an election last year for the governor  is currently working in 17 battleground states to “make sure every eligible American who should cast a vote will be able,” Abrams told a Nov. 15 National Press Club Headliners luncheon.

Fair Fight 2020 initially began in three states—Louisiana, Mississippi, and Kentucky—where there were governors races this year, as a way to “end voter suppression and ensure fair elections,” she said.

The organization hires, pays for, and trains staff for state Democratic parties, and keeps in touch with them as they do their work. State parties are the only entities that are permitted to be in the polling place and able to monitor what is happening from registration to voting, she explained.

As an example of its work, Abrams said in Kentucky the Republican governor purged 175,000 people from the voter rolls, and Fair Fight 2020 was able to help the state party file a lawsuit that allowed all of those purged voters to cast ballots in November.

“We make sure state parties are able to actually fight back,” she said.

Abrams blames her narrow loss for Georgia governor on widespread voter suppression, and her group filed a lawsuit that seeks to overhaul the state’s election system, claiming that it impaired people’s ability to vote in the gubernatorial election and deprived them of their constitutional rights under the First, Fourteenth and Fifteenth Amendments.

Before the 2018 election, more than 1.4 million people were purged from the rolls and 214 out of 3,000 precincts were closed, according to Abrams. In addition, she said, her group received more than  80,000 calls from people reporting problems they faced when they tried to register or vote.

Voter suppression is “alive and well in the Sunbelt,”  Abrams said, and has to be addressed now, far in advance of the presidential election next year. She noted that since the Voting Rights Act was “eviscerated”  in 2013, 17 million voters’ names nationwide have been purged and 1,688 precincts have been shut down.

Responding to a question about her political aspirations and whether she would consider being the running mate of the eventual Democratic nominee, Abrams said:  “Would I be honored to serve as the second to a person who is trying to fix our nation? Absolutely. Would I be open to doing so with any of the top nominees? Absolutely. I am a Democrat, and I believe I can serve.”

Asked about the fact that the next Democratic debate is being held in Atlanta, Abrams said that decision indicates that Georgia is a battleground state and its 16 electoral votes can be delivered to a Democrat. Abrams, who received the highest number of Democratic votes in Georgia history, said the number of Democratic voters in the state increased by 40 percent from 2014 to 2018. In 2014, 1.1 million Democrats voted for governor, but in 2018 1.2 million African-American Democrats voted for her, she added.