FOIA as a last resort: Getting public information through the front door, tomorrow 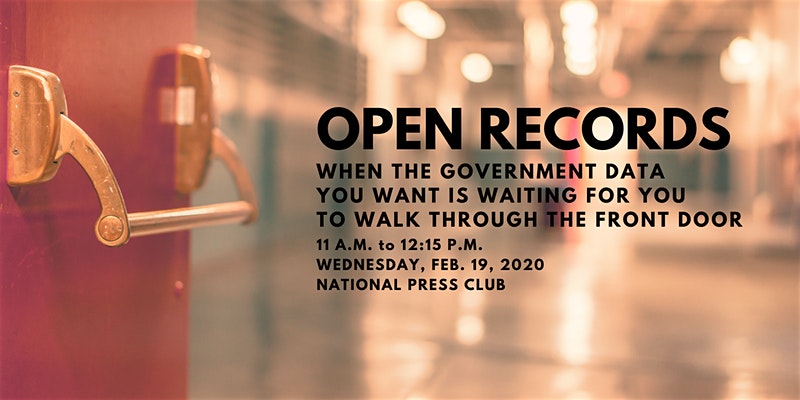 As a reporter, filing a Freedom of Information Act request should be your last resort. The government documents you need may be hiding in plain sight. Whether you’re a Washington policy writer, a regional reporter or a local journalist covering a beat, this workshop from three accomplished reporters will show you how to get the government records you always wanted but weren’t quite sure how to find.

The session will take place from 11 a.m. to 12:15 p.m. Wednesday, Feb. 19, at the National Press Club. Registration is $10 for the general public and $5 for Club members. Register online.

Jerry Zremski, Washington bureau chief for the Buffalo News, will share tactics from his dogged coverage of Rep. Chris Collins’ investments, which led him to a pump-and-dump scheme that caught the attention of federal prosecutors. Last month, Collins was sentenced to 26 months in prison for insider trading. Zremski will describe how he uses available public records to connect dots and track the work of the congressional delegation he covers for his readers.

Alex Mann, crime and courts reporter for the Capital Gazette in Annapolis, has pursued the case involving the 2018 murders of five people in the Capital Gazette newsroom. Mann found that scores of documents had been closed without any court order or public notice as lawyers were taking advantage of a loophole in electronic record filings. Mann will discuss how to use court records to keep abreast of a running story, how to discover new ones, and how to question any record that is declared confidential.

Alison Fitzgerald Kodjak, investigative editor for the Associated Press and immediate past-president of the Club, has covered money in politics, the financial crisis, the BP oil spill, and health care policy by digging through government agency records. Kodjak will share tips that fueled her award-winning coverage at NPR, the Center for Public Integrity and as a reporter at Bloomberg News, the Philadelphia Inquirer and the Palm Beach Post.