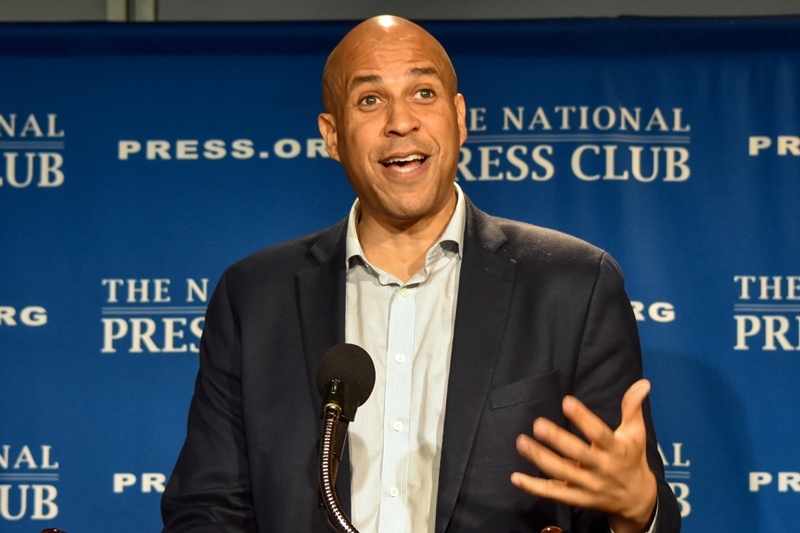 Sen. Cory Booker, D-N.J., said he is the unifying Democratic presidential candidate who can unite the party and defeat Donald Trump at a National Press Club Headliners Newsmaker Wednesday.

“At this moral moment in America, I am the best leader to unite the entire party,” he said.

“I can and have united progressives and moderates,” he said, adding that he would not engage in personal attacks on other candidates for “the sake of winning a short term polling boost.”

A job requirement for the successful Democratic candidate is the ability to develop diverse coalitions and particularly to demonstrate the ability to win in African American communities, he said.

He cited his special election for the Senate, held on a Wednesday in October ahead of the rest of New Jersey contests in November. His election drew a larger proportion of African American voters than did the general election, he said.

If the party wants to win in the midwest, African Americans will be needed, he said. If they had turned out in 2016 as they had in 2012, Hilary Clinton would now be president, he said.

Booker also noted the need for Democrats to energize Asian and Hispanic voters.

In addition to his ability to develop coalitions within the Democratic Party, he pointed to his success working on both sides of the aisle in the Senate and working successfully with a Republican governor in New Jersey, despite strong differences.

Asked about his strategy to win primaries, Booker noted that poll numbers at this stage in a presidential campaign have not been predictive in the Democratic Party. Both former President Jimmy Carter and Democratic candidate Hillary Clinton were behind in polls at the same stage as now during their campaigns.

He noted that effective organizations in New Hampshire and Iowa are critical. He acknowledged that fund raising would be his campaign’s biggest challenge in the next 100 days because fund raising gets reflected in the polls.

Booker reacted to questions on the use of the term lynching and whether Donald Trump is racist by shifting to broader issues of racial disparities and a climate of division and hatred.

It is not the existence of racism but what are we doing about it, he said.

He listed racial disparities in incarceration, health care, hiring and other areas as targets for action.

A question on fellow candidate Job Biden’s stance on legalizing marijuana also led Booker to expound on a larger issue.

Marijuana laws are racial laws, he said, because of the disparities in prosecution and incarceration of black and white users. He cited his experience at Stanford University where students openly used and traded the drug with no fear of prosecution.